India is a country full of beauty and history, that belongs on everyone’s bucket list. My time in India was nothing short of an adventure. But with the insistent honking of horns from the organized chaos that is traffic to the vibrant splashes of color from intricately draped saris to the almost overwhelming smells of spicy food… it will undoubtedly cause some culture shock for those who have never visited this bright and bustling country…but I’m here to offer some tips!

I know I had done a travel post on India a while back, but that post was more centered around the wedding I had attended while I was in India. (To see more on my experience in a traditional Hindu wedding, click here.) This time, I’ll be (finally) taking a more comprehensive look at the places we visited and tours we experienced while in India and offering some tips to those who had never visited before. Enjoy my “top places to visit in India!” 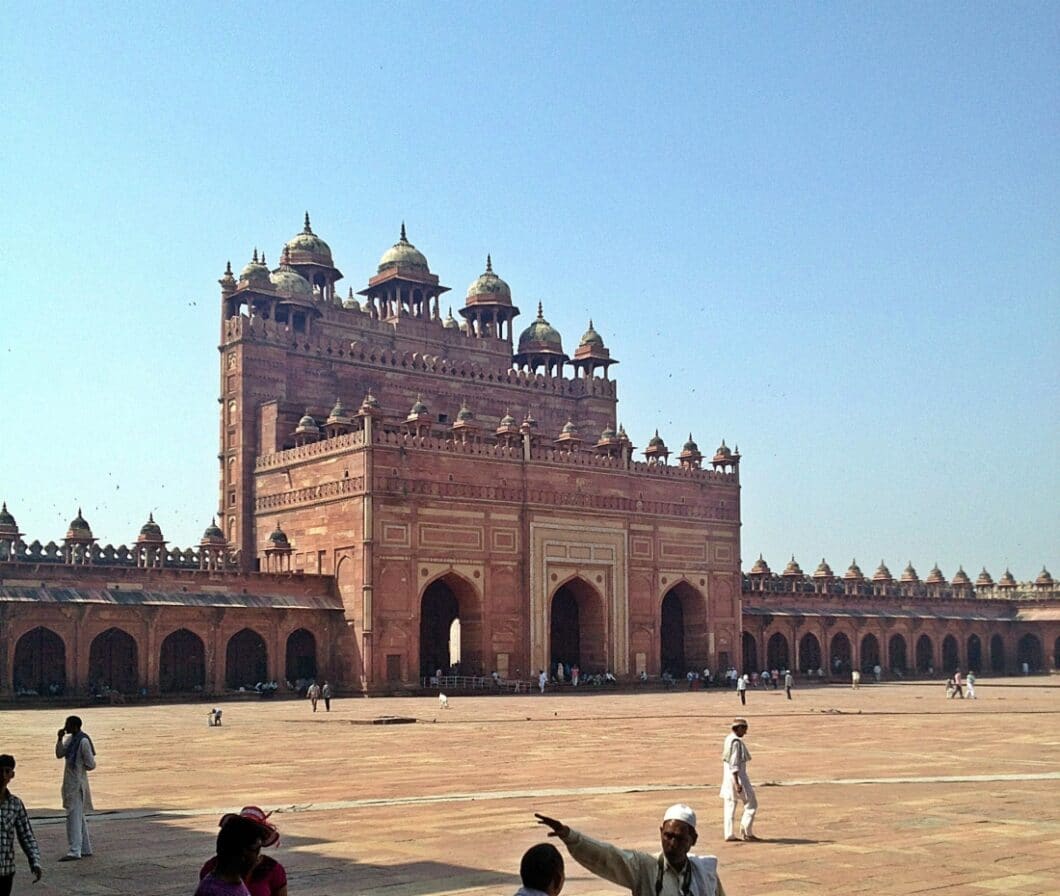 Fatehpur Sikri is a city in Agra that was built during the second half of the 16th century and was the capital of the Mughal Empire for about 10 years. It is made up of monuments and temples, all in a uniform architectural style, and also includes one of the largest mosques in India. It’s also a UNESCO World Heritage Site.

I had not heard of Fatehpur Sikri until I arrived in India and our friend’s recommended we visit it while we were in Agra. It was absolutely incredible. All of the buildings and monuments were breathtaking. The only thing to be aware of when visiting Fatehpur Sikri is that you must be barefoot. Which doesn’t sound too bad, but it was 110 degrees Fahrenheit the day we were there, and holy moly does the stone you’re walking on get hot! Either walk in the shade or try to find carpet squares that have been laid out in the sun. Haha.

We had booked a tour guide for Fatehpur Sikri, which was very helpful. He was able to give us a lot of fun facts, as well as help us in situations we may not have been familiar with (such as taking our shoes off and leaving them with strangers. Or covering our heads with plastic caps when we went into one temple.) Click here to see more on that tour.

If you are visiting India, The Taj Mahal is undoubtedly a must-see. Many of the locals had tried to dissuade us from seeing it…arguing that there were far more valuable and ancient sights to see in their country. However, I can say without a doubt that I am so happy we visited the Taj Mahal, and would have regretted it forever if we had not made the journey to see it.

For every place we had visited in India, I am also very happy we had a tour guide. Every guide we had was incredibly knowledgeable and was able to show us some wonderful locations to take photographs. They were also able to offer little bits of advice such as, “Stay away from the monkeys! They bite!” Haha. Our tour guide was also able to help us avoid being in too many photographs ourselves. A lot of people wanted their photos with the “American tourists.” Our guide explained this was because many of the locals visiting are from small villages and had never seen anyone outside of their ethnicity before. Which, my first thought was to be nice and take photos…but if we did this we would have never seen the Taj Mahal, haha. (And our guide also explained some of the people were asking for rather derogatory photos. Which, with us not speaking Hindi, we would have never of known.) 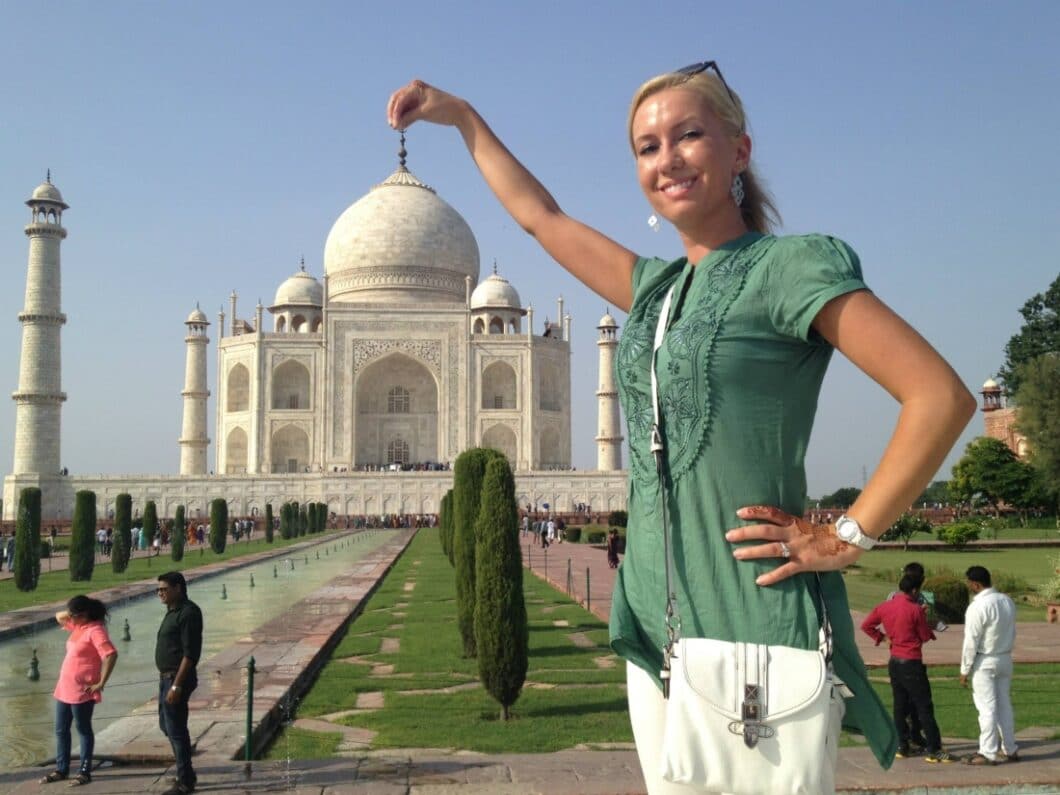 Click here to see more on the tour we took. This tour also included Agra Fort (which I’ll explain next). The only thing I didn’t love about this tour was that at the end our tour guide offered to take us to a place where they made marble tiles, the same way the marble decorations were made in the Taj. Which is cool and all, but at the end you are then pressured to buy some of these marble creations (which can be found at just about any gift store on the street in India). So, if they offer to take you to a bonus stop at the end, just don’t feel obligated to buy anything.

Agra Fort was built in the 16th century and is one of the most important strongholds of the Mughals. (Click here to read the complete history on Agra Fort.)

Agra Fort is absolutely beautiful, and again, I was very happy we had a tour guide to tell us more about the history of it. Interestingly enough, the Indian government still uses Agra Fort for some of its military..and only certain parts are open to the public.

This tour of Agra Fort was included in our Taj Mahal tour and also included transportation to the Taj Mahal and Agra Fort from our hotel. (Click here to see more on the tour.) Also, the hotel we stayed at while in Agra was the Hotel Taj Resorts. I’m pretty sure this was the only night I had gotten a decent sleep while I was in India, haha. The hotel was very comfortable and clean…and had proper air conditioning. It was wonderful!

Goa is known for its beautiful beaches and resorts. And boy was Baga Beach beautiful! We had visited in the off-season (September), and the water was rough… swimming was definitely not advised. Also, ladies, I would NOT advise wearing a bikini here. Beaches are slightly more conservative in India. (I wore a one piece with shorts over it and a long cover up.)

We had stayed at the Santana Beach Resort in Candolim (near Baga Beach) for this part of the trip – and I would highly recommend it (at the time we only paid about $30 a night to stay). You’re right next to the beach (unfortunately, the water was too rough when we were there to enjoy it)…but they have a lovely swim up bar and they also had the best seafood I had ever had. The prawns were HUGE, so tasty and they were only about $5. I loved staying here!


The Basilica of Bom Jesus is a UNESCO World Heritage Site and holds the mortal remains of St. Francis Xavier. “It is said that the saint’s body was as fresh as the day it was buried.” And that his body has miraculous healing powers. (While the majority of people in India practice Hinduism, Goa is actually primarily Catholic.) We had a local friend who was kind enough to give us a tour here, but if you are interested in a tour guide check out this one here.

New Delhi is a city I wish we could have spent more time in. There are many museums and monuments to visit, but if you only have an afternoon (like we did). Just seeing the outside of Lotus Temple was pretty darn cool. It is a Bahá’í House of Worship that is a flower-like shape. It is open to anyone, no matter their religion. And India Gate is a prominent memorial in New Delhi, it is a memorial for the Indian Soldiers who died in World War I and the Afghan Wars.

We did not visit Jaipur while we were in India, and I really regret this. My friends and family did, however, and their tales of the jungle and seeing wildlife in Jaipur sounds incredible. I would love to visit monkey temple and ride a camel too! I really hope to return to India one day.

This post honestly doesn’t even cover all that I experienced while we were in India. If you have any questions at all, feel free to ask away in the comments section!

Has anyone else been to India? Or are you planning a trip there? What are your top places to visit in India? Let me know in the comments!