As crazy as it may sound, Moscow’s Metro is so beautiful it absolutely deserves its own tour. You can visit scores of stations and be blown away by each station’s unique architecture.

There are over 200 subway stations in Moscow, so it is certainly worth having a plan before you go. This post will share useful tips before you start your tour, plus 6 stations I thought were amazing! Enjoy!

5 Things To Know Before Touring the Moscow Metro

1.) Your Options for Touring the Moscow Metro

A.) Guided Tours. Given how expansive and confusing the Moscow Metro is, guided tours are a very popular option. You can do group tours or private tours. In my personal opinion, if you go the guided tour route, keep it as inexpensive as possible and save your money for a private tour of the Kremlin instead. Group tours are generally quite inexpensive, and from what I’ve noticed, quite small. This one is highly rated and less than $20.

*One thing to note, the metro is a loud/busy place to be…therefore, hearing your guide will likely be a bit difficult.

B.) Do the Tour Yourself! The Moscow Metro may seem intimidating, and it can be rather easy to get lost. Personally, though, I don’t think getting lost here is a bad thing! You’ll just discover a new, beautiful station. And it seems after the World Cup, not all, but many subway signs are also in English.

2.) There are No Elevators

It’s only stairs and escalators inside the Moscow Metro. Wear comfy walking shoes!

3.) Where to Stand on an Escalator

On the escalators, be sure to stand on the right side if you will not be walking up. If you’re walking up the escalator, use the left-hand side. (I LOVE how organized this is!)

3.) How to Know Which Direction You’re Heading…

(If you’re doing a guided tour, you will not need to do this.) If you’re going to be using the metro during the duration of your stay in Moscow, it’s worth it to get a Troika card. These cards are free and you can refill with money at any metro kiosk or automated ticket office. Riding the metro only costs 36 rubles! (About 50 cents in USD.) It doesn’t matter how many stops you go, as long as you don’t exit the metro, you can actually do your whole metro tour for just 36 rubles. How awesome is that? (You can also buy a single-use ticket, if you only want to ride the metro for a tour.)

If you’re like me and rely on Google Maps to get you everywhere…you’re going to run into some trouble in Moscow. Google Maps does not work very well here (especially when it comes to the metro). So, downloading Yandex Metro will give you a good map of the metro stations and show you how to get from station to station. (You can also click here to print a map of the Moscow Metro.) And Yandex Maps will be your replacement for Google Maps while you’re in Moscow. 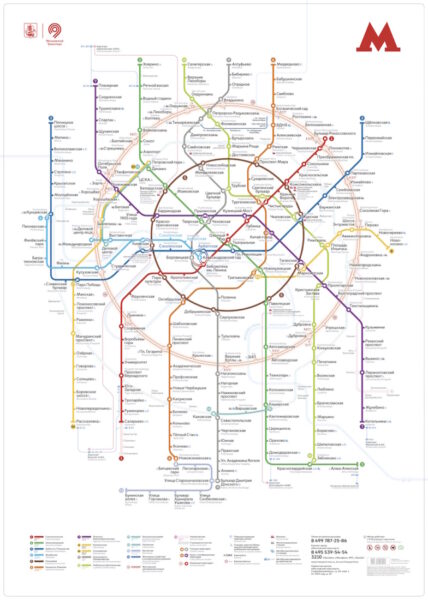 Novoslobodskaya is most famous for its stained glass windows. It was designed by Alexey Nikolayevich Dushkin a famous Soviet architect.

This station is also where you’ll find the famous mosaic by Pável Korin entitled “Peace Throughout the World.”

Kievskaya features large mosaics by A.V. Myzin celebrating Russian-Ukrainian unity. Both the mosaics and the arches between the pylons are edged with elaborate gold-colored trim.

This station is famous for its socialist realism statues. Each arch has a pair of bronze sculptures by Matvey Manizer depicting the people of the Soviet Union, including soldiers, farmers, athletes, writers, aviators, industrial workers, and schoolchildren. There are a total of 76 sculptures in the station.

Komsomolskaya is the most impressive station in my opinion! The theme of its design is the Historical Russian fight for freedom and independence. This is expressed in eight large ceiling mosaics by Pavel Korin.

The theme of this station reflects the nearby Botanical Gardens of Moscow State University. It also has a memorial for the Belarusian partisans.

*I know there are MANY more impressive stations to visit in Moscow. However, these are very easy to get to and can be visited in under a couple hours. This article is worth reading if you’re interested in seeing even more metro stations in Moscow!

Shop more of my listings on
Poshmark
Loading Comments...