“A Gentleman in Moscow” by Amor Towles is a must-read novel, recommended by even the likes of Bill Gates and soon it will also be a TV series. You don’t have to be interested in Moscow either to be charmed by the wit of Count Alexander Rostov – the book’s main character.

The Count’s story takes place almost entirely in the Metropol Hotel in Moscow near the Bolshoi and the Kremlin. This hotel is where he is sentenced to house arrest in 1922 for the remainder of his life.

Count Rostov, an indomitable man of erudition and wit, has never worked a day in his life, and must now live in an attic room while some of the most tumultuous decades in Russian history are unfolding outside the hotel’s doors. Unexpectedly, his reduced circumstances provide him a doorway into a much larger world of emotional discovery. 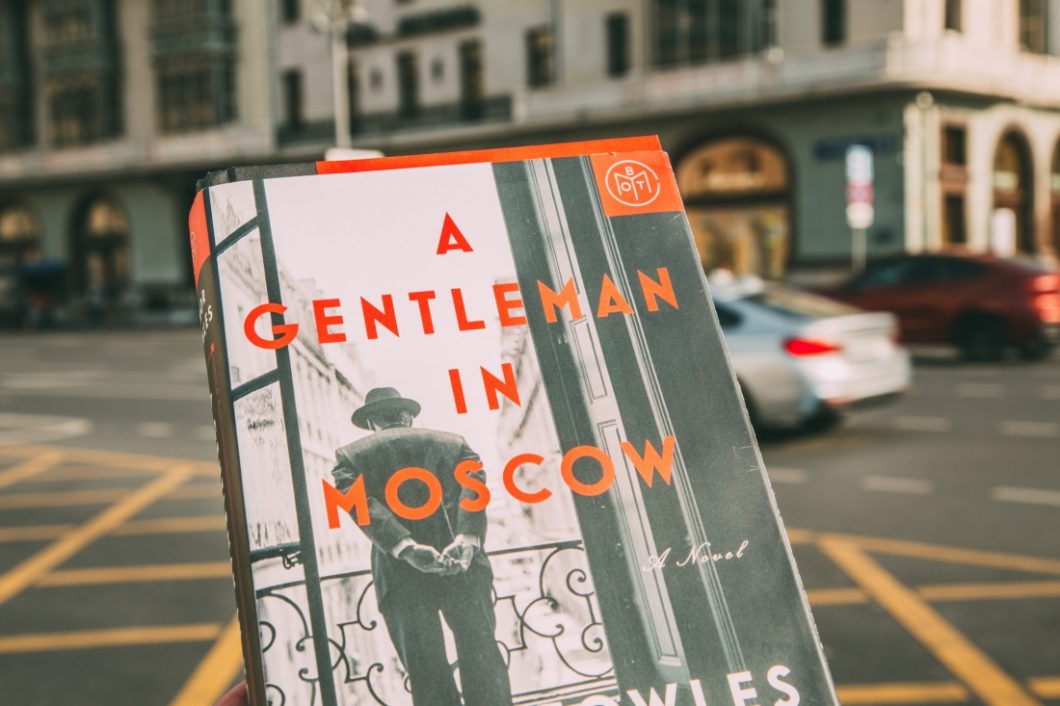 I was prompted to read it by my good friend Shannon who lent me her copy on my last trip back home. It took me about a week to devour it from cover to cover and immediately became one of my favorite books I had ever read. The Count is an endearing character who one can’t help but be fascinated with and emotionally invested in.

If you haven’t read the book yet, stop right here and then click here to get yourself a copy! 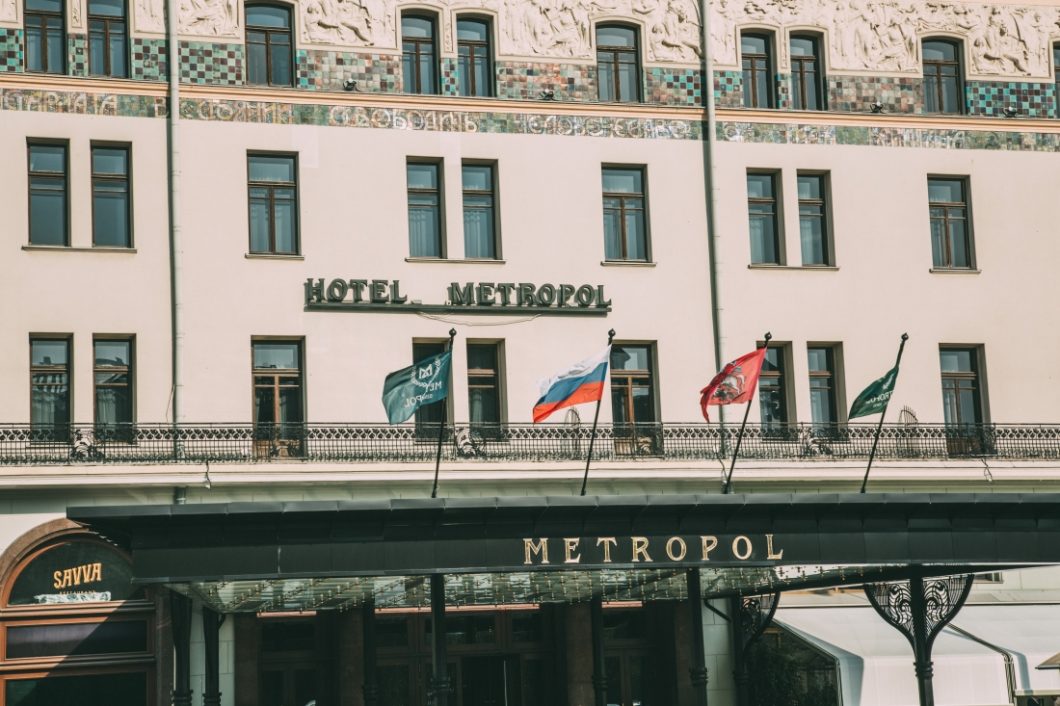 I was fortunate enough to be living in Moscow while I read the book. So, of course, once I finished it…I had to check out the Metropol Hotel for myself.

I reached out to the Metropol to see if it would be possible for me to follow in Count Alexander Rostov’s footsteps…and was delighted to hear the Metropol will absolutely arrange “A Gentleman in Moscow” tour of the hotel, you can even book “A Gentleman in Moscow” centered package at the hotel – complete with a stay in a room of your choice (perhaps, suite 317?), drinks at “the Shalyapin bar,” a dinner consisting of the Count’s favorite meals…and then breakfast by the hotel’s fountain (an important spot in this novel, if you haven’t read it yet). 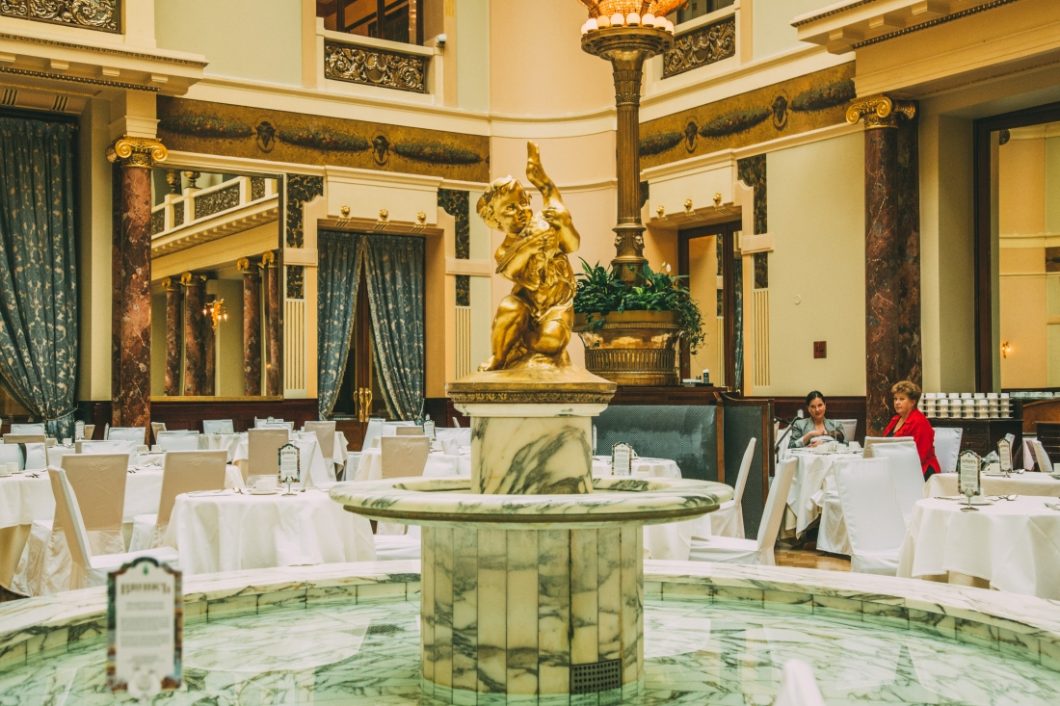 “If a man does not master his circumstances then he is bound to be mastered by them.”
― Amor Towles, A Gentleman in Moscow

Having only a week to arrange the tour during the hotel’s peak summer season, all of the suites were occupied. But a tour of the historic Metropol Hotel is still possible…even without an overnight stay.

Enter the Metropol Hotel from the same entrance as the Count would have on his final entry into its grand, marble lobby. The hotel has multiple entrances, but the one facing the Kremlin is the only one ever mentioned in the book. 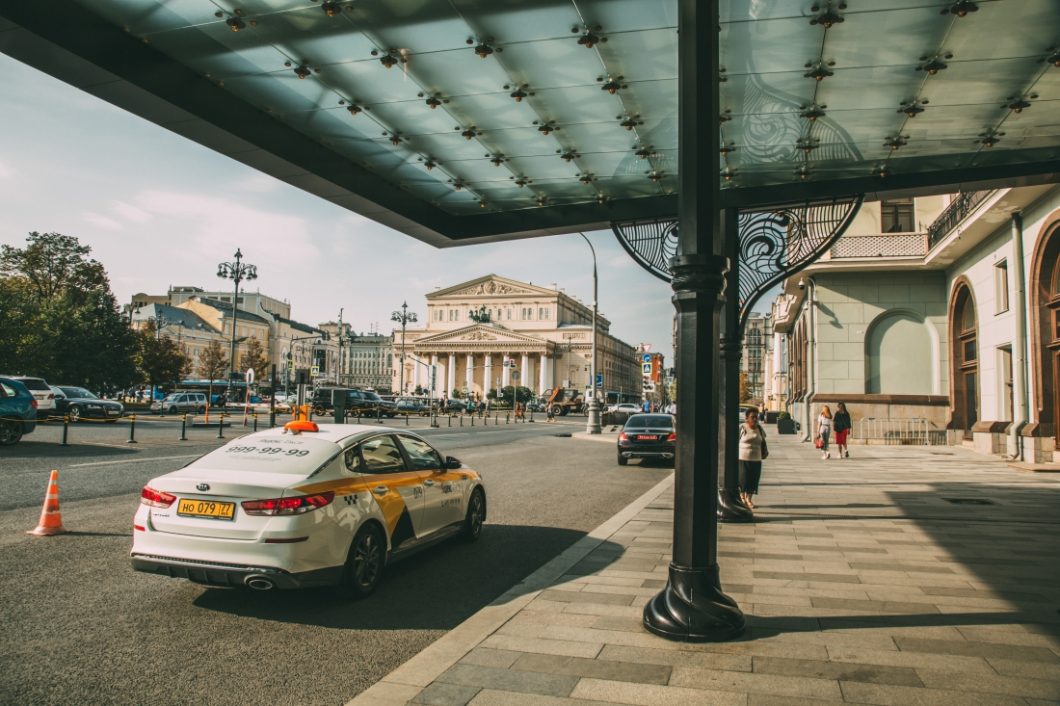 After passing through the hotel’s security, take a moment to admire the lobby and see if you can spot any similarities to the book – and what the differences might be!

I had expected to be greeted by an employee of the hotel and given a brief tour of its interiors, sprinkled perhaps with some historical facts and maybe a few spots mentioned in the book. What I did not expect was to be greeted by Daniel, who not only had studied the book in great detail but also embodied the Count’s fondness of telling an artful story, his “curled mustaches” and deep love of the Metropol Hotel.

Daniel’s enthusiasm and deep knowledge of both the hotel and the book was a wonderful surprise and made this tour of the Metropol Hotel very exciting!

The tour started by pointing out that the Shalyapin Bar had been moved from its corner facing the Bolshoi Theatre to the righthand side of the hotel across from the elevators.

The staircase where the Count meets Anna 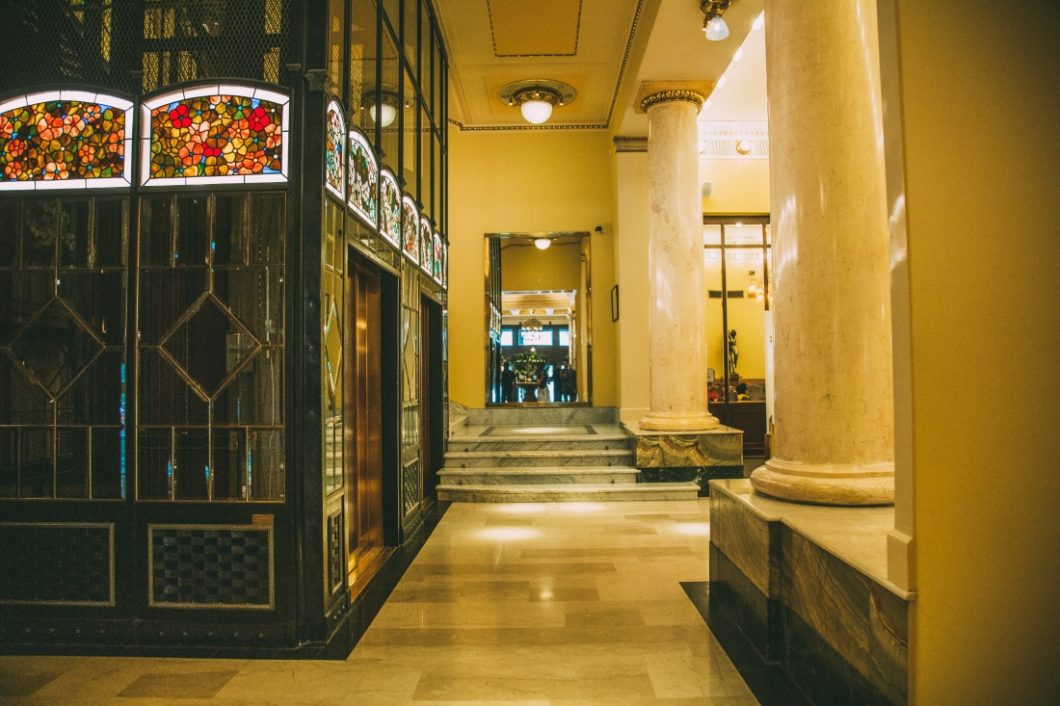 You’ll then round the corner and enter the infamous grand dining room know as “the Piazza” in the novel.

It’s not quite the casual restaurant described in the book. Instead, you can enjoy a grand breakfast or brunch in the morning hours…or even rent the room for a private event.

You’ll, of course, notice that the fountain where the Count meets Nina is indeed right it should be, though. 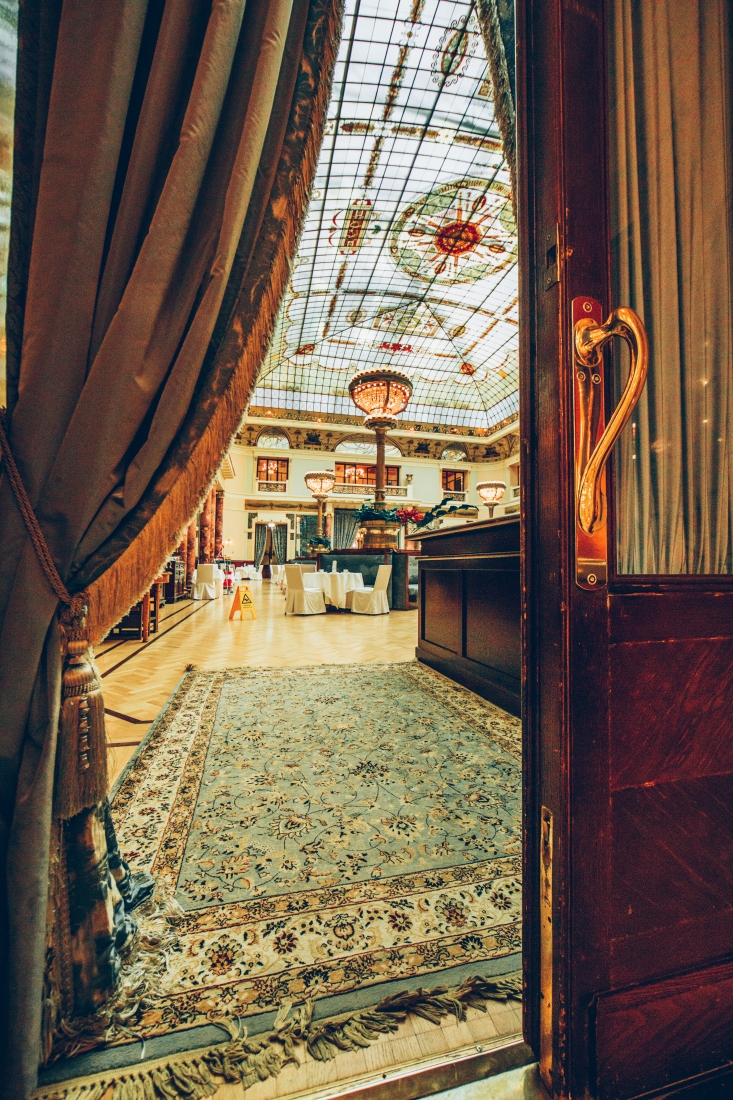 Daniel also told a story of how in the early days of the hotel, this fountain used to have live fish swimming in it. Sometimes, a guest would pick out their dinner from the fountain…where the chef would promptly take the fish into the kitchen, throw it away and prepare a suitable fillet of fish for the unknowing guest.

The balcony for Nina’s “experiments” 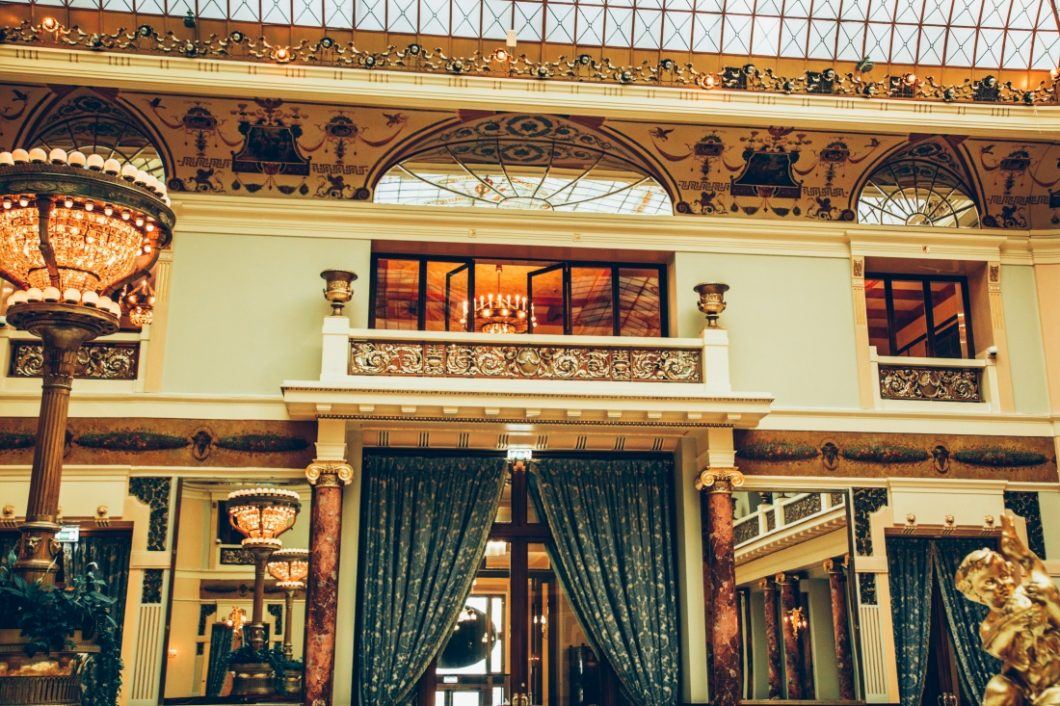 This would have also been the room that housed the balcony that Nina used for her “experiments.” You’ll also be able to walk up to the balcony to get a better view of “the Piazza” and to imagine yourself as Nina, dropping a pineapple and such from here. 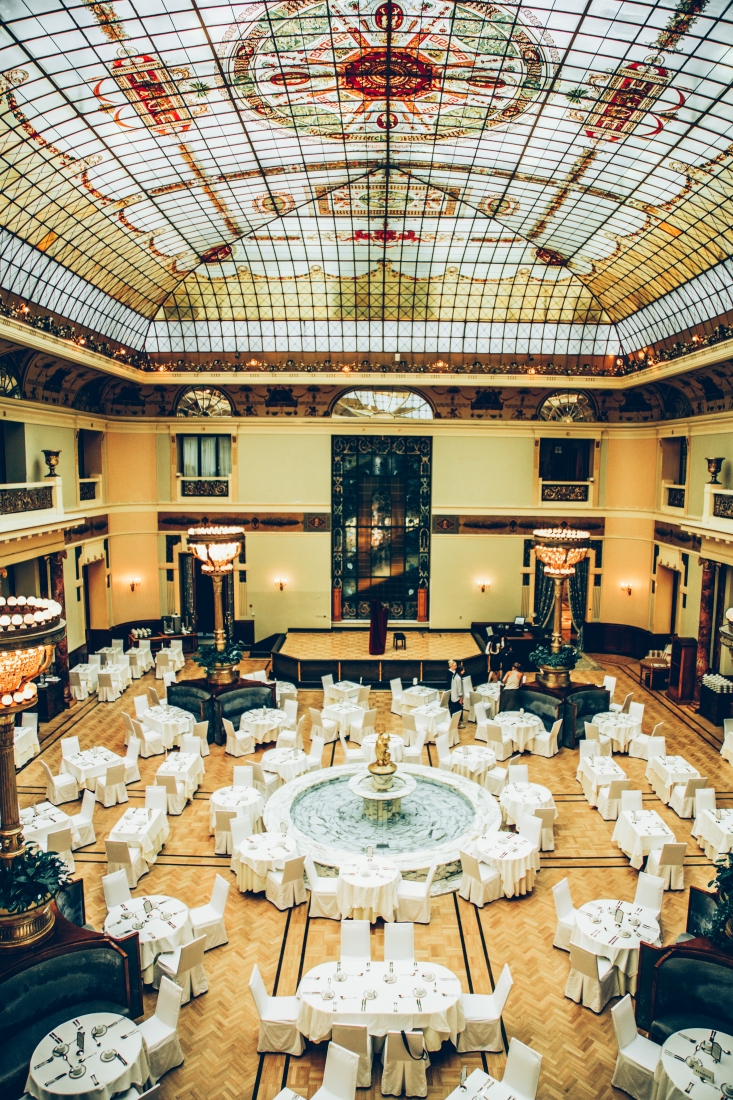 The Count’s original room 317 (before he gets moved to the attic) was occupied the day I visited, but I was still able to get the same view of the Bolshoi Theatre from a second-floor window. (This room was more of a meeting room and not a suite.)

The Count’s view of the Bolshoi Theatre from his old room. 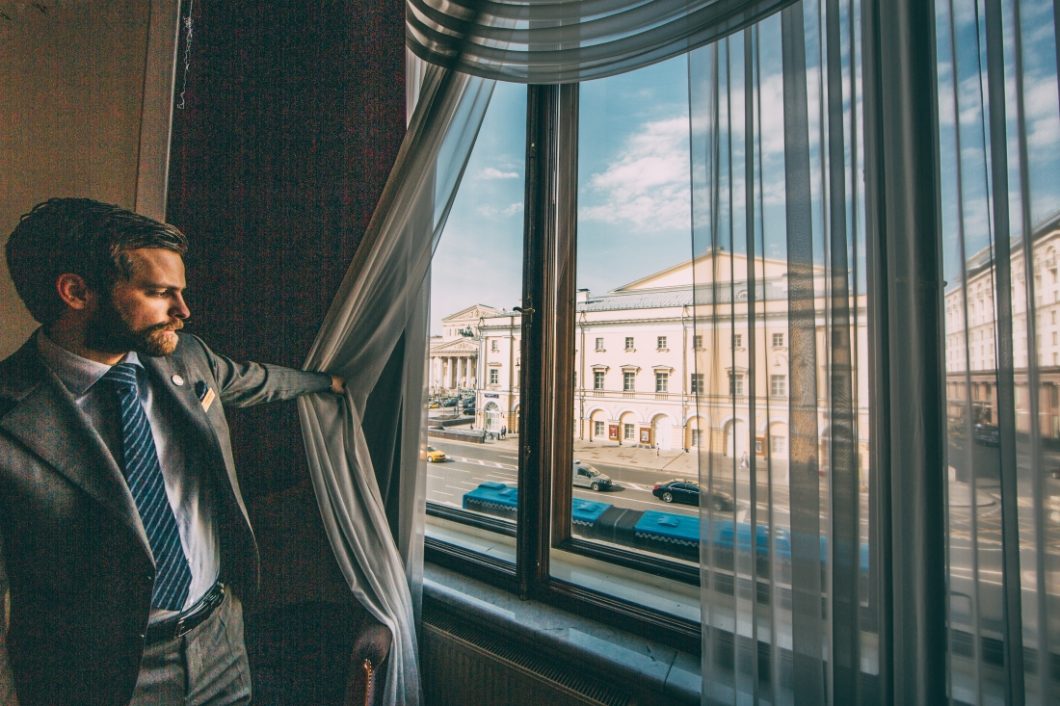 And while the “wine cellar” (with all of its lable-less wine), technically doesn’t exist, you can still visit the room where it would have been on your tour. It’s a lower level banquet hall that may one day become the hotel’s spa…

Where the hotel’s “wine cellar” would have been 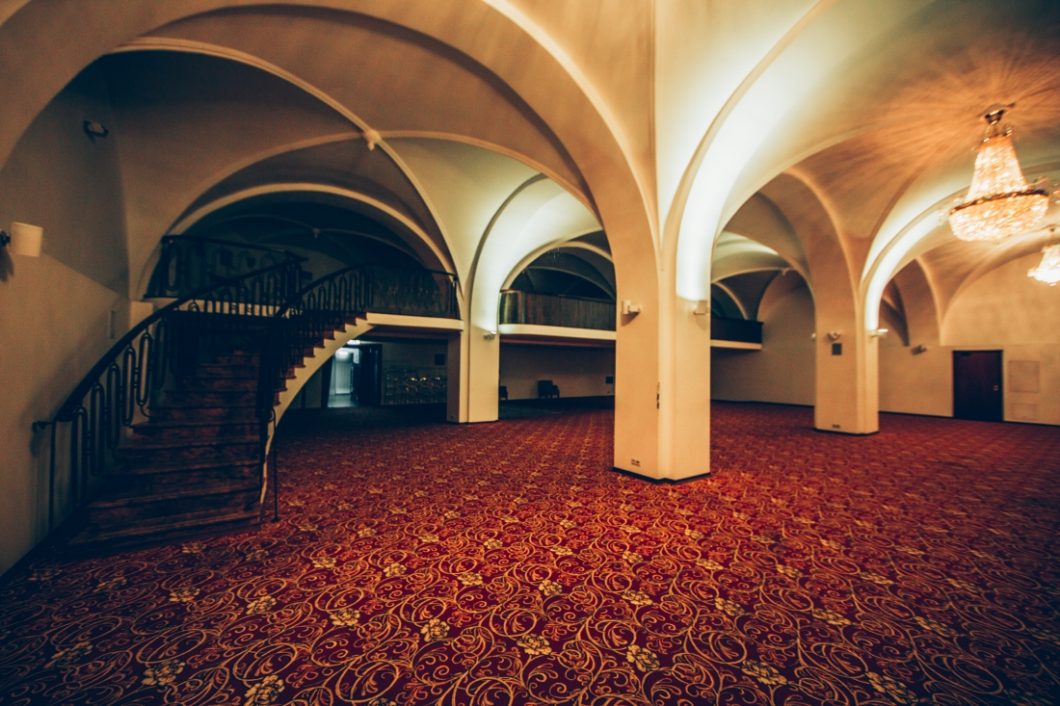 Next, you’ll make your way up to “The Boyarsky Restaurant.” Now, technically, this isn’t a restaurant anymore. It’s a room now used for private functions. (I had visited it just after it was used for a private luncheon for some visiting diplomats.)

It’s very similar to how I had pictured it, though! And it is fun to think of the Count expertly waiting tables here. 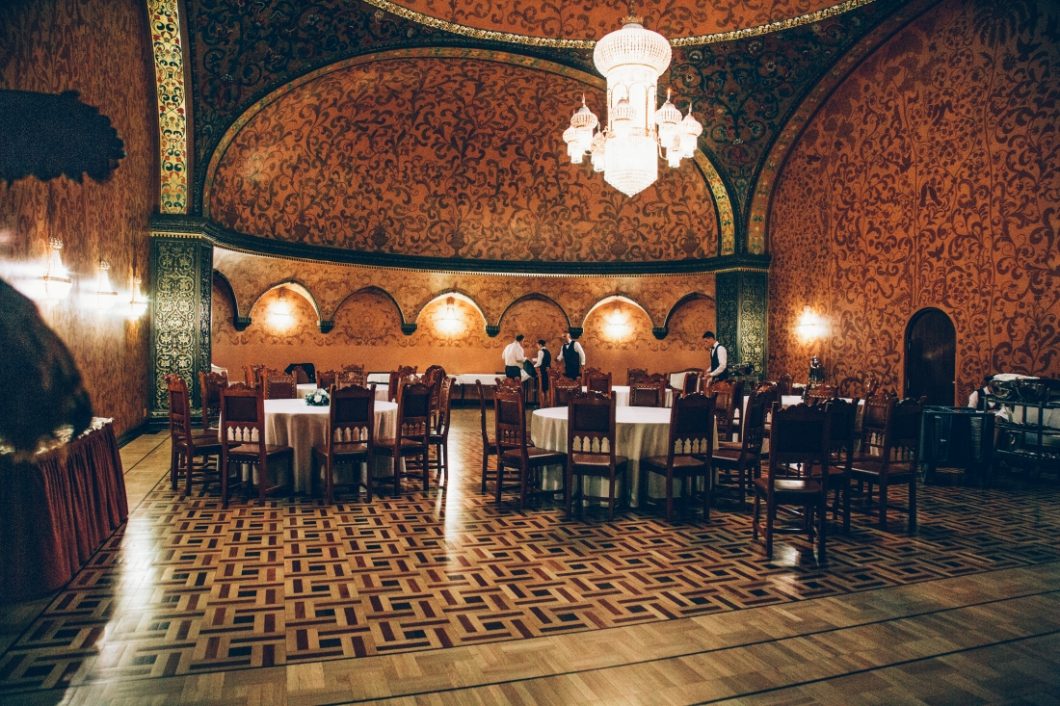 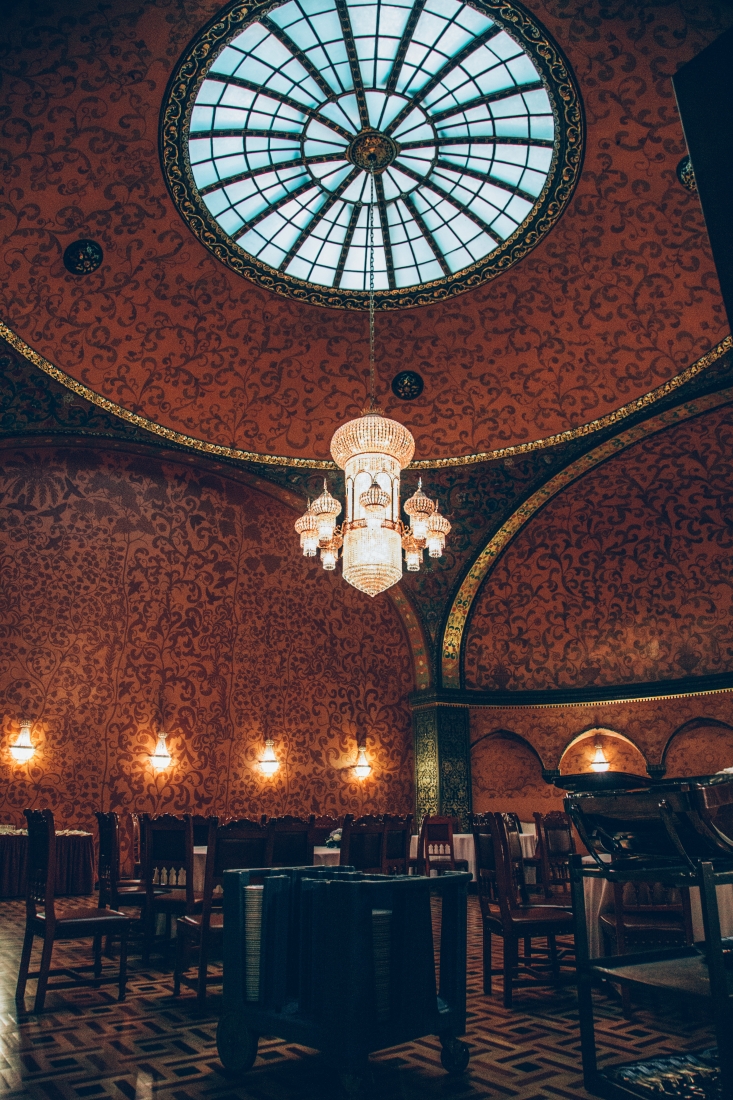 The 6th floor/”attic” of the hotel does exist, though! It was a level which used to be used for storage and for housing the servants. However, in more recent years the 6th floor has been converted to rooms. So, you could also stay in a room on the 6th floor…just as the Count would have. (Although, I’m assured that these rooms are far nicer than the one the Count had!) 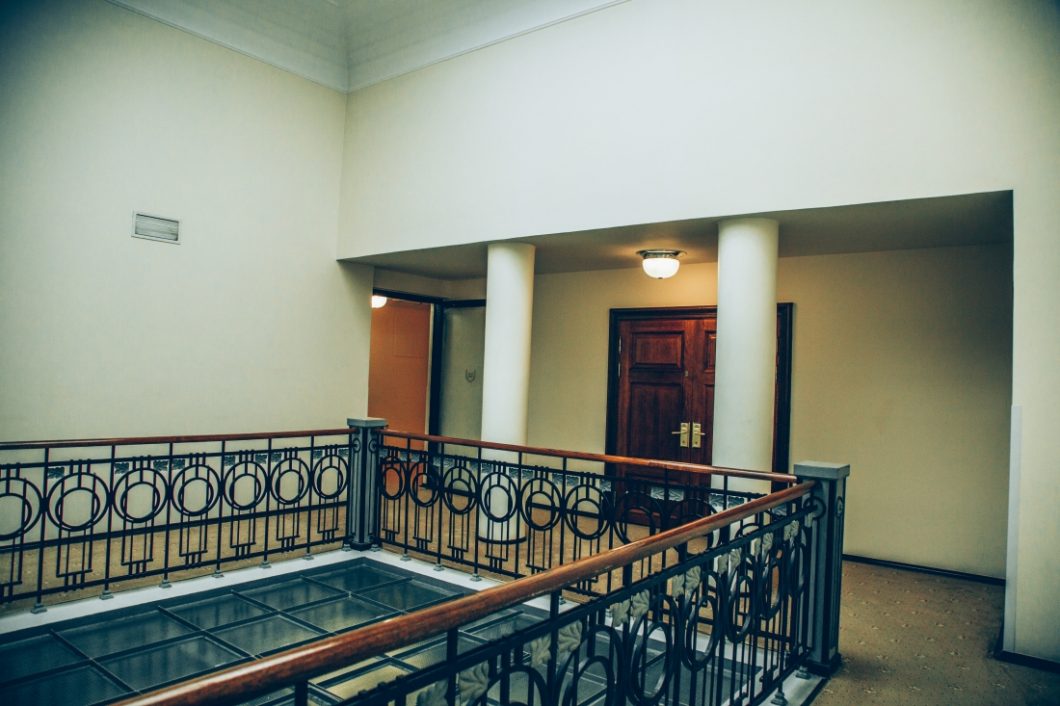 The tour will also show you other aspects of the hotel – such as famous guests who have stayed here, the hotel’s founder, beautiful rooms and views!

Additional photos from the tour

Alas, why not end your tour with “A Gentleman in Moscow” cocktail? It’s “a cocktail that features a drop of decadence with a tone of comfort, sweet notes balanced against citrus flavor. It is served in a sphere of ice that one can break into the glass. Same as a writer puts an entire life, an entire world under a book’s cover so that you can share a few exciting hours or days with the company of your favorite characters.” 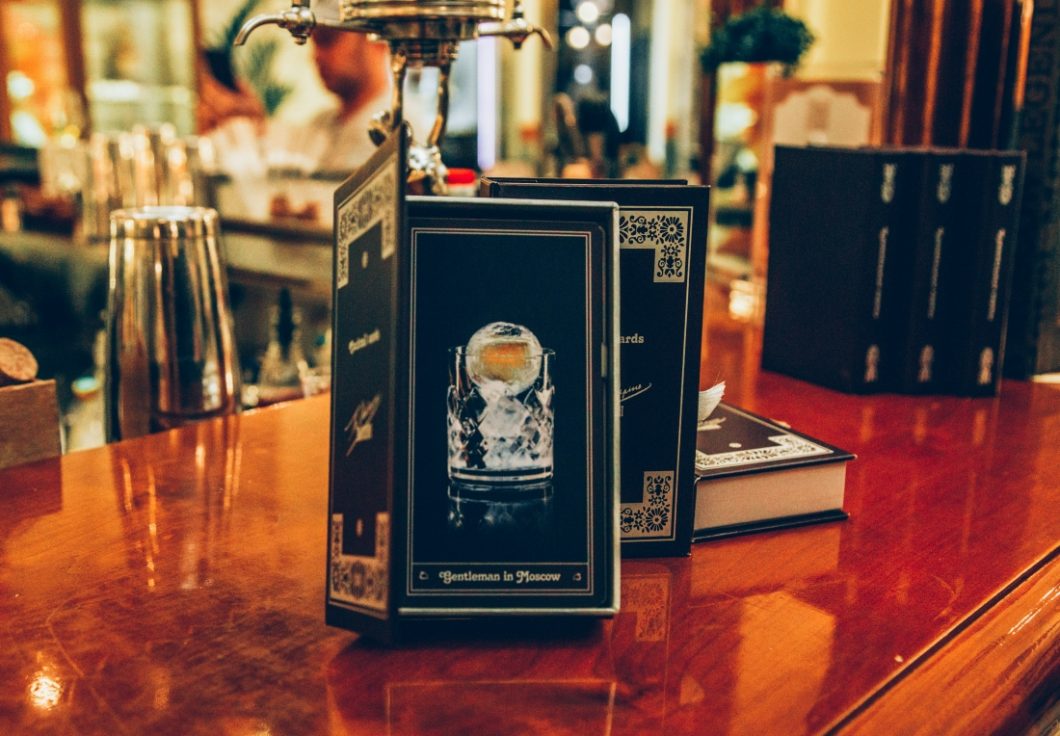 I did end up coming back to the hotel later that night after a performance at the Bolshoi to have a drink at the bar and sample this cocktail. I’m more so like the Count, and generally only partake in wine and beer, so this cocktail was a bit outside my normal palette – but I did enjoy it. I also enjoyed getting to break the ice sphere with a little hammer…

“A Gentleman in Moscow Cocktail” 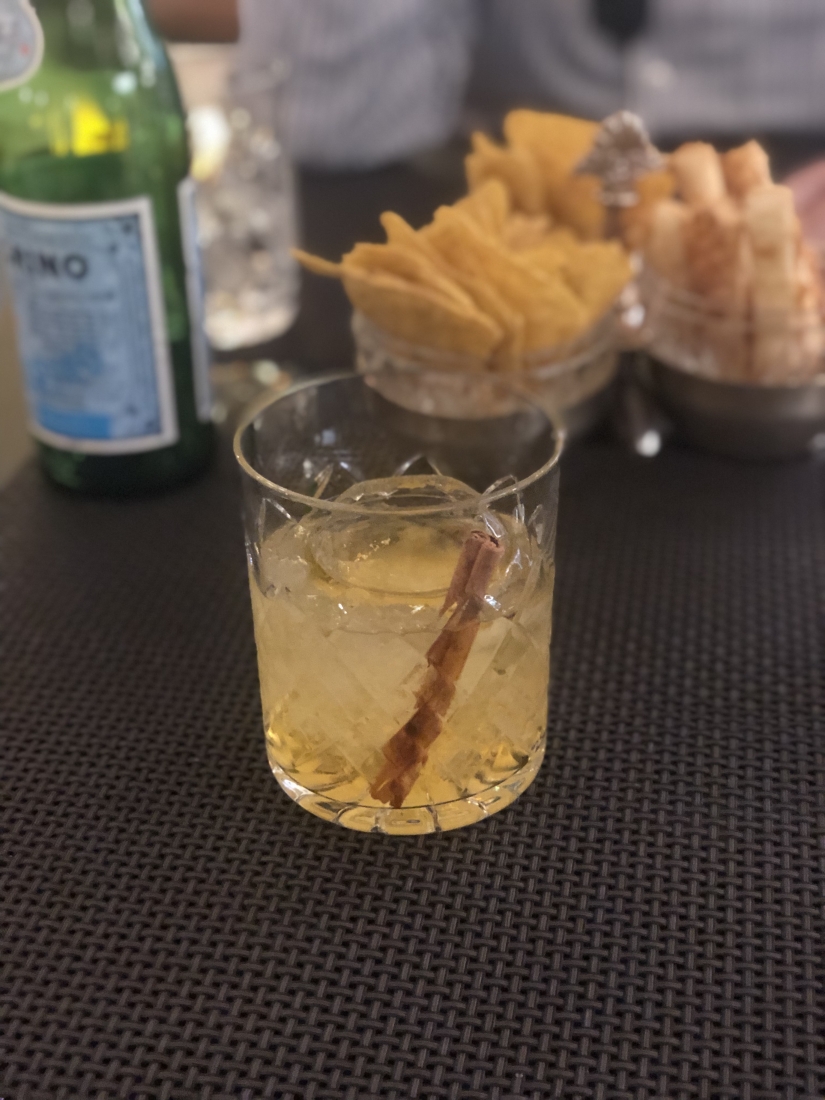 Are there any other fans of “A Gentleman in Moscow” out there? Let me know if you’ve read the book in the comments! (I’m also happy to answer any questions about the tour in the comments section.)

*Click here to get yourself a copy of the book!

**Thank you to the Metropol Hotel for facilitating this tour for me. All opinions are my own, and I am never compensated for a positive review. 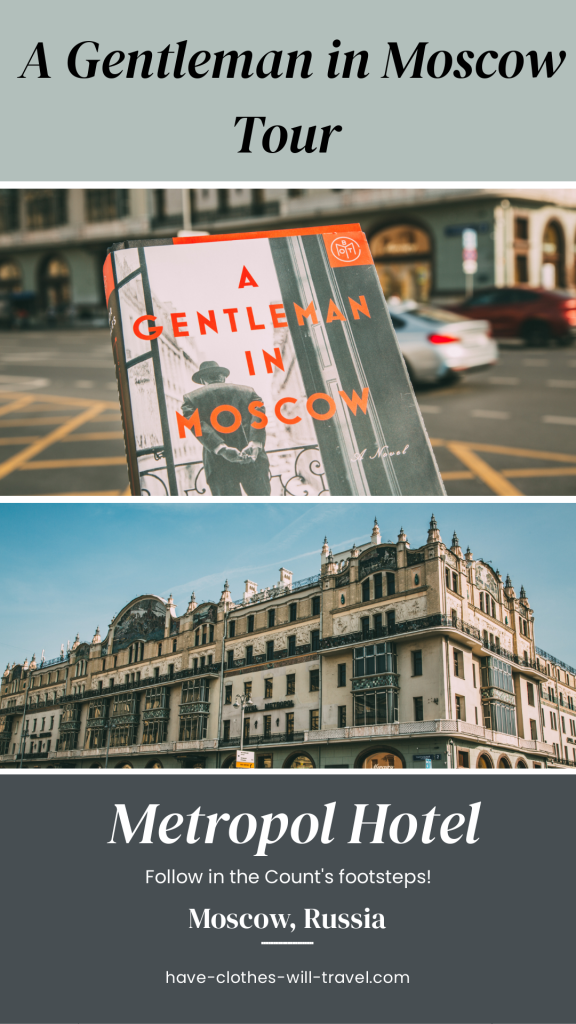 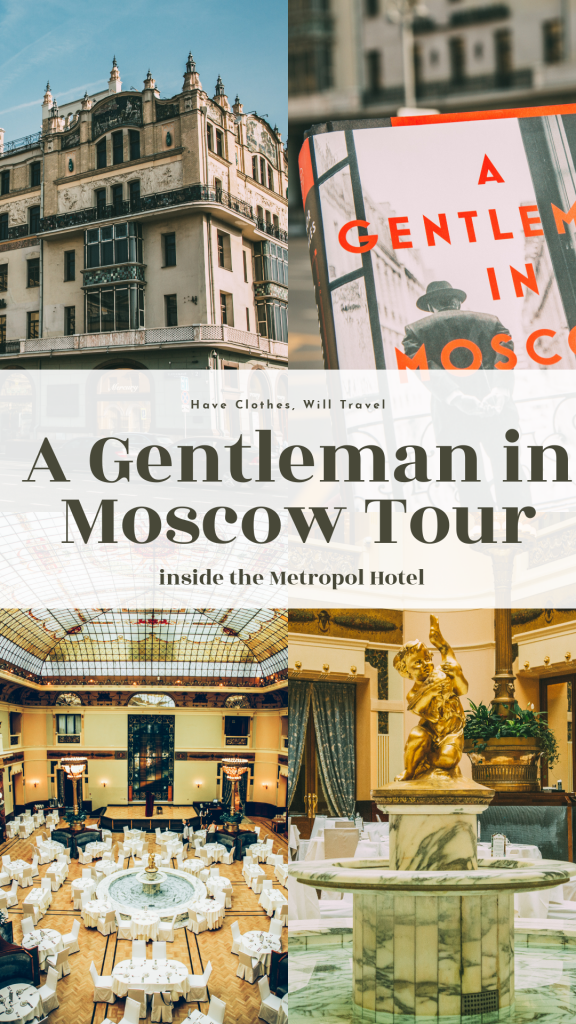